Nomination papers must be signed by the candidate and filed in person or by an agent (no fax or email).

Nominations must be filed at the Municipal Office during the period:

Nomination papers will not be accepted after the deadline.

Nominations may be made by completing and filing in the office of the Clerk, nominations on the prescribed form and accompanied by the Declaration of Qualification, acceptable identification (must be valid and contain the candidate's name, qualifying address and signature), the prescribed nomination filing fee ($200 for the Office of Mayor, $100 for all other offices), and such other documentation as required for the filing process.  The filing fee is payable by cash, certified cheque, bank draft or money order payable to the Township of Chisholm.

If a greater number of candidates are certified than are required to fill the said office, there will be an election.  If the number of nominations for an office is less than the number of candidates to be elected an additional Notice of Nomination will be advertised on the website only and additional nominations may be filed between 9:00 a.m. and 2:00 p.m. on the Wednesday following Nomination Day (August 1, 2018).

A candidate is entitled to receive a refund of the nomination filing fee if he or she files the documents under s.88.25(1) - the financial statements and auditors report, on or before 2:00 p.m. on the filing date. In the case of the 2018 regular election, the filing date is March 29, 2019 for the reporting period ending December 31, 2018.

If a candidate wishes to withdraw completely, the candidate must file a written withdrawal of their candidacy, by no later than 2:00 p.m. on July 27, 2018 (Nomination Day) in the Clerk's Office.

Any withdrawals sent by mail, email or fax are not permitted, as it must be filed in the Clerk's Office. 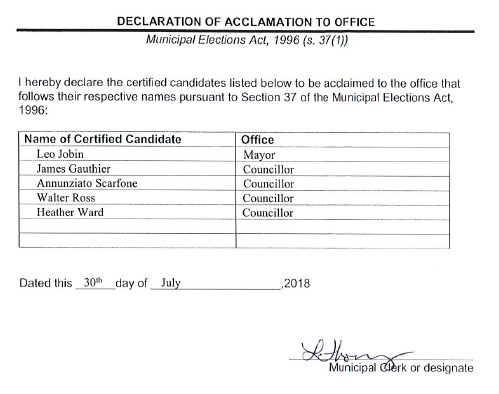 Appointment of Acrutineer by Candidate

A person is qualified to be elected or hold office, who, as of the day he or she files his or her nomination is:

The following persons are disqualified: